Ghost Whisperer: The First Season
The Dead Are Talking... And She Is Listening 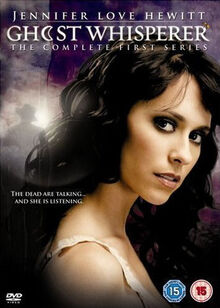 The Ghost Whisperer: The Complete First Season DVD (known as The Complete First Series in Region 2 markets) box set is the first DVD compilation of Ghost Whisperer episodes. It features the 922 minutes of show produced as part of Season 1, as well as a number of other special features. The Region 1 DVD boxset was released October 31, 2006 after being delayed, and was released July 9, 2007 in Europe.

Special Features Menu
Add a photo to this gallery
Retrieved from "https://ultimateghostwhisperer.fandom.com/wiki/Season_1_DVD?oldid=7475"
Community content is available under CC-BY-SA unless otherwise noted.