Horror Show is the fifteenth episode of the third season, and the fifty-ninth overall episode, of the CBS series, Ghost Whisperer, originally premiering on April 25, 2008. The episode was written by Jeannine Renshaw, and directed by Ian Sander, and recieved a total of 8.98 million viewers.

Melinda is caught up in an investigation that turns a little horror flick when Prof. Payne asks her to help a student whose father mentored him. Melinda investigates the haunting of a college student who wreaks havoc by placing Melinda in scenes from horror movies. 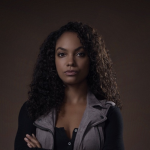