"Till Death Do Us Start"

Eli James is a character that was introduced in the first episode of season four, portrayed by Jamie Kennedy.

During a building fire on the Rockland University campus on October 3, 2008, he died but was brought back, causing him to have a near death experience. It unlocked an ability that allows him to hear ghosts, but doesn't allow him to see them like Melinda. Throughout the fourth season, he adjusts to his newfound ability and starts helping her cross ghosts over. His ex-girlfriend, Zoe, died in the season four finale after a thief being influenced by a Watcher broke into her home and she fell down the stairs. He is now the guardian of the "Book of Changes" since Zoe died. Zoe was the previous guardian.

Mediumship(Limited): After having a near death experience, Eli gained the ability to communicate with ghosts but not see them, after coming to terms with his new abilities he now helps ghosts cross over. 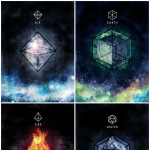